A little something for you. 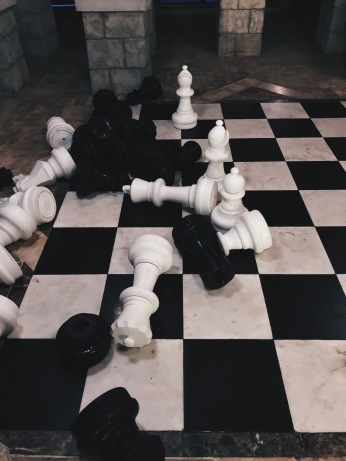 People covered in white and black lean on one another like pieces from a chess game mourning the loss of their king.

Afra, the youngest, breaks down in front of his room.

Held by Faisal and Mohammed, my mother walks into the room.

“Abdulaziz…” Her voice is reduced to little whimpers of protest. Like units of harmony, her body falls with her tears. The boys barely keep her on her feet. Someone hiding in the shadows of the room pushes forward a chair to hold her in place.

People are scattered. Some are pacing the floor, some are on their knees, others are holding onto him. I’m standing still by the door, watching as the motions slow down.

Everyone comes and goes as I stand still by time’s side. Afra lifts herself up, stumbles to his room’s door and falls back on her knees. She buries her face in her abaya and lets out weak screams of whatever remains within her. She looks up at me. I’m standing solid.

“I knew…” Her voice is barely human. “I knew that…” She forgets to breathe again. “I knew he won’t make it out this time.” I think we all knew. I raise my eyebrows and purse my lips.

A scream is let out near the I.C.U.’s main door. Someone must’ve overheard her.

“I knew it.” She knew it? What happened to the laughter and jokes I witnessed just weeks ago? What happened to knowing he’s okay because he scolded you as usual? Are you fooling us or have you been fooling yourself? I keep quiet.

My hands are held in a fist. My legs are heavy. My eyes are burning. My face is almost expressionless. I look away.

Trying to avoid the overbearing expression of sadness and the insensitivity towards the almost-still-alive patients in the I.C.U, I step towards the door.

One step. One glimpse. The world is frozen. Time is unconscious.

Hassan is holding his hand. He looks like he’s been crying. How did he manage to get his tears to flow out? To his left is my mother. She’s holding onto her brother. Her grip screams stay. Her voice yells please don’t leave me. I see the desperation in her eyes. If those eyes could see his soul, she’d grasp it as he tries to ascend.

“Abdulaziz…” She can barely wipe off her tears. Her face is boiling with sadness. I see her begin to age, but a part of me wants to hold her; protect her from the cruelties of this world.

Like a little child, she sniffs, cries, calls his name, and looks around in desperation for something. Her eyes are filled with hopelessness and hope. I can only guess its for some sort of answer, for someone to tell her he’ll be okay.

Oh, mother. I wish I could take you away from life’s harm.

“Abudalziz…” I wonder if he can hear her. She looks up at Faisal. “My brother. Help my brother. Where’s the doctor?”

I grab a box of Kleenex and offer to replace her wilted tissue. I place the box next to her and place my hand on her back, hoping it’ll calm her down.

I wonder if it’s enough.

My world froze when I saw her pain, yet, I can’t take any of it away. I can’t numb her heart or bring him back. The only thing I can offer is a touch and words I chose to keep to myself. In this wreck, she is the only thing I see.

There is so much love in her pain. She sits in a pool of emotions, drowning the air in her humanity, splashing around feelings. Her face turns all shades of pink before it settles for a light red.

I shift my gaze towards him. He’s laying still. My restless uncle is laying still. Every day he complained about being confined to bed. Today, he doesn’t speak. I wonder if he’s comfortable. He doesn’t like his bed this low, nor does he like the nurse assigned to remove the medical tubes from his body.

A part of me grows sadder. Yesterday, he was a stubborn wise man, often scolding us, embarrassing his children or laughing with his grandchildren. Now, I’m watching him become a memory.

His illness ate away pounds leaving him with nothing but skin and bones. His jokes, his charms, and laughter turned to words weighed down by sedatives. He was no longer able to lift the finger he pointed at us mid-scold or swallow down his food.

I take a step closer and manage to make it past my father and aunts.

I look down at him but nothing feels different. Everyone is sad but he’s in peace. It’s a familiar feeling; almost homely I’d say. After two years of dying, my uncle, the love of my life, is finally at peace.  He’s finally at peace. Why doesn’t anyone understand?

The end of his misery was the beginning of theirs.

Hesitantly, I lift my hands up and place my palm on his forehead. He’s cold. I run my fingers through his long hair. It’s soft. His beautiful white strands look like peace, a peace he must be feeling right now.

I lean forward and place a kiss on his forehead.

This site uses Akismet to reduce spam. Learn how your comment data is processed.

This work is licensed under a Creative Commons Attribution-NonCommercial-NoDerivatives 4.0 International License